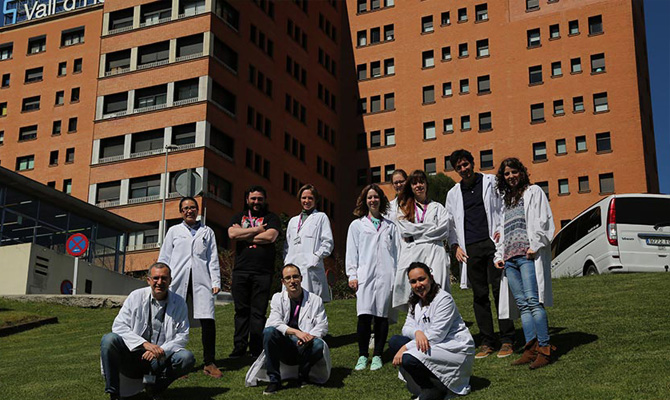 Researchers from the Group of Molecular Oncology CIBBIM-Nanomedicine at Vall d’Hebron Institute of Research (VHIR) have validated a gene, called PPOX, as a new therapeutic target against colorectal cancer. Furthermore, this study opens the door to the validation of more targets, as PPOX is only one of the 966 genes that researchers have found overexpressed in rapidly proliferating tumor cells. The results of this 5-year research have been published in the Clinical Cancer Research journal.

Researchers characterized at the molecular level the differences in growth rates of cancer cells in order to identify new therapeutic targets. “We knew that rapidly proliferating tumors have the poorest prognosis. For this reason, our purpose was to investigate different cell lines of colorectal cancer”, explains Dr. Diego Arango, main author of the study. His team specifically assessed the growth ratio of 52 cell lines from human colon cancer samples in vitro.

After a microarray analysis, researchers identified the 966 genes that were highly expressed in rapidly growing colorectal cancer cells. Their hypothesis was that the inhibition of the overexpressed genes may interfere with tumor growth; therefore these genes may be considered as potential chemotherapeutic targets.

“TYMS gene, which is one of the few therapeutic targets that we currently use in chemotherapy, was one of the overexpressed genes that we identified in colorectal cancer tumors”, says Dr. Arango as a supporting proof to the previous hypothesis.

As it was not logistically possible to validate the 966 identified genes, researchers did a proof of concept with two genes (GAPDH and PPOX) with known chemical inhibitors.

Firstly, the inhibitors of these genes were administered into in vitro cultured cells and, as a result, rapid tumor cell proliferation was controlled, as it happened with 5-FU, a well-known agent used for chemotherapy.

The next step was to do the experiment in a mouse model. The results were significant in one gene, as Dr. Arango points out: “treatment with PPOX inhibitors showed a reduction in growth in 3 out of the 7 colorectal cancer lines that were investigated (42.8%), so that we are facing a new therapeutic target for colorectal cancer treatment”. He otherwise explains that a significant reduction in tumor growth with the GAPDH inhibition could not be achieved, which, according to him, was probably due to an inappropriate drug dose.

Nowadays there are few approved therapeutic agents to battle against colorectal cancer and the response rate for each drug product is lower than 30 %.

Colorectal cancer is one of the three types of cancer with higher prevalence rates for both men and women in the Western countries. According to data provided by the Spanish Society of Medical Oncology (SEOM), 15,000 Spanish people die every year from this disease, with 30,000 new cases diagnosed annually.