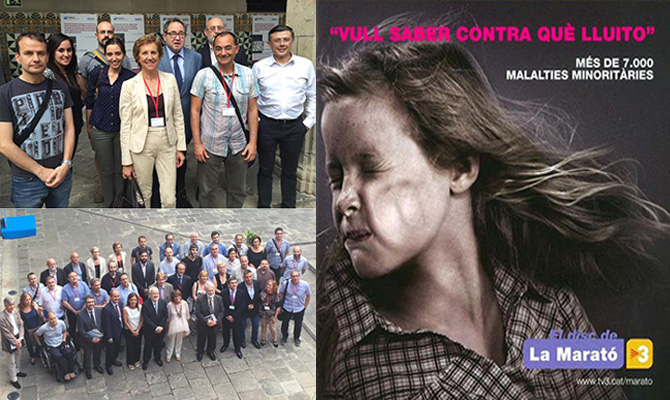 On Monday afternoon, 20 research projects funded by La Marató 2009 devoted to rare diseases were presented in the 16th Symposium La Marató of TV3, at the Institut d’Estudis Catalans’ facilities. There were researchers from Vall d’Hebron, who had participated in three of the projects.

Dr. Soledad Gallego, member from the Translational Research in Child Cancer group headed this project, which had the objective of analyzing the effect of the inhibition of the Notch’s signalizing pathway in a murine model in order to identify new therapeutic targets for rhabdomyosarcoma, which is a malignant tumour of soft-tissues, such as the muscles, tendons or the connective tissue.

Thanks to the help from La Marató they could demonstrate the anticancinogenic effect of the inhibitors of this signaling pathway and their potential application as a therapy for the rhabdomyosarcoma. These results will be validated in 2016 in a clinical trial using different types of inhibitors. Furthermore, they have described a new method to detect rhabdomyosarcoma’s cells in liquid biopsies that will help to identify patients with a unfavorable evolution to intensify their treatment.

Development of nanomedicines for the enzymatic substitution in Fraby’s disease

Dr. Simó Schwartz, coordinator of the Nanomedicine Centre at VHIR (CIBBIM), headed this project in which also participate researchers from Institut de Bioenginyeria de Catalunya, Faculty of Chemistry at Universitat de Barcelona, Hospital of Santa Creu and Sant Pau, Institut de Ciència de Materials de Barcelona and Institut de Biotecnologia i Biomedicina of the Universitat Autònoma de Barcelona. The aim of the study was to develop a new drug delivery system to improve the therapeutic efficacy of the enzymatic substitutive treatment in Fabry’s disease, which is produced for the accumulation of liposomal Gb3 lipid depositions.

As a result of the project, they designed a new nanoconjugated on the basis of lipid unilamelar vesicles that transport the defective enzyme, called alpha-galactosidase, via a specific targeting system against the endothelial membrane receptors.

With this new nanoconjugated, the efficacy of the enzymatic substitutive treatment in Fabry’s disease will increase, as well as will improve the evolution of the disease and its morbidity and mortality.

Proteomic analysis of posttraductional modifications of trastiretine as a marker of the activity in patients suffering heredity amyloidosis due to a mutation of the TTR: a case-control study

Dr. Francesc Canals, researcher from the Vall d’Hebron Institute of Oncology, participated in this project with researchers from Hospital Clínic and Institut Químic de Sarrià. The objective was to study the role of the modifications of the transtiretine molecule in the development of the heredity amylidosis caused by the deposition of this plasmatic protein in several organs.

Thanks to the contributions of La Marató, researchers could analyze the plasma levels of different kinds of modified transtiretine, which had changes in the cistein-10 residue. If the results are confirmed in a study with more samples, the measurement of modified trastiretine plasma will allow the early determination of the amyolidosis process in healthy carriers and thus, to begin the treatment in the initial stages of the disease.

La Marató 2009 raised 7.1 milion Euros for the research focused on these diseases. There are more than 7,000 different pathologies, severe and chronic, affecting 400,000 people in Catalonia. However, each one is affecting less than 5 people out of 10,000, according to figures obtained by La Marató.

Combating rare diseases is one of the main objectives of VHIR, where about 200 (from 26 different clinical areas) are under investigation right now. Among doctors, predoctoral and postdoctoral researchers, nurses and technical staff, at Vall d’Hebron over 350 professionals are improving the knowledge of these diseases and are trying to find treatments to improve the quality of life and cure patients.