Tumour cells are dependent on fat to start metastasis

HomeBlogNew Technologies and Craniofacial MicrosurgeryTumour cells are dependent on fat to start...
14 December, 2016 1359 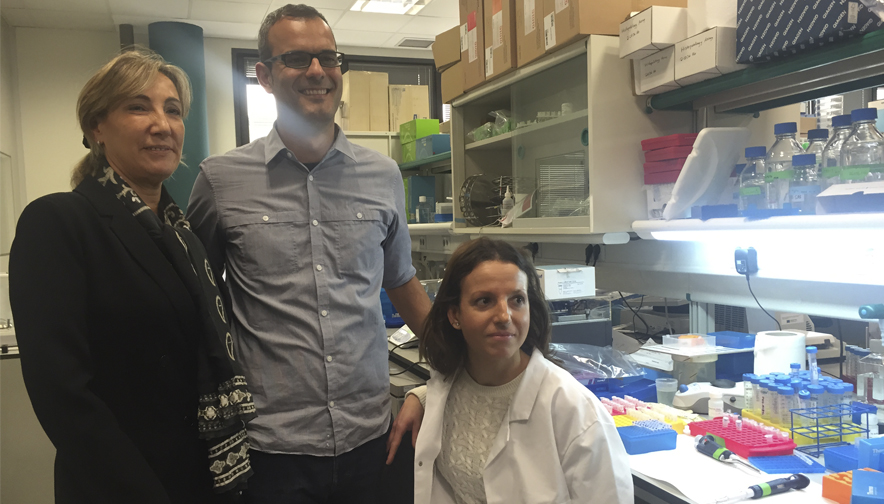 A study headed by Salvador Aznar Benitah, ICREA researcher at the Institute for Research in Biomedicine (IRB Barcelona), and published today in Natureidentifies metastasis-initiating cells through a specific marker, namely the protein CD36. This protein, which is found in the membranes of tumour cells, is responsible for taking up fatty acids. CD36 activity and dependence on lipid (fat) metabolism distinguish metastasis-initiating cells from other tumour cells.

The study has been possible thanks to the collaboration of the Service of Oral and Maxillofacial Surgery, the Service of Pathology Anatomy and the biobank of the Vall d’Hebron Hospital, with the participation of Coro Bescós and Juan Antonio Hueto from the Vall d’Hebron Institute of Research (VHIR). The study is thus the result of collaboration between basic and clinical research and it aims to transform research results into useful treatments for patients.

The researchers discovered the metastatic CD36+ cells in samples from patients with oral cancer with different degrees of aggressiveness, provided as part of the collaboration with the Vall d’Hebron Hospital. In the mouth tumours analysed, very few cells were found to have metastasis-initiating capacity. The addition of CD36 expression to tumours that did not cause metastasis made them become metastatic.

Furthermore, the researchers have demonstrated that the effect exerted by CD36 on metastasis is the same for melanoma cells and luminal breast cancer cells. Likewise, statistical analyses of samples from patients reveal that the metastasis of ovarian, bladder and lung cancer are also dependent on CD36.

“Although we have not yet tested this in all tumour types, we can state that CD36 is a general marker of metastatic cells, the first marker I know of that is generally specific to metastasis,” says Salvador Aznar Benitah, head of the Stem Cell and Cancer Lab at IRB Barcelona.  “We can now obtain metastatic cells in the laboratory. This will allow us to trace them and to study, for example, their distribution in the tumour, where they anchor when they leave it, or why they are so sensitive to fat, among other questions,” adds the first author of the study Gloria Pascual.

Dr. Aznar-Benitah pointed that “We expect this study to have a big impact on the scientific community and to further advances in metastasis research, and we hope to be able to validate the potential of CD36 as an anti-metastasis treatment. Things like this don’t happen every day.”

Given the involvement of lipid metabolism in metastasis and the function of CD36 in this process, the next logical question for the researchers was: does fat intake have a direct effect on metastasis? The researchers provided mice with a high-fat diet (15% more fat that normal, equivalent to what a so-called “cafeteria diet”). They then inoculated them with a type of oral cancer, which in standard dietary conditions would lead to 30% of the animals developing metastasis. Strikingly, under the high-fat diet and thus with a greater amount of lipids in blood, around 80% of the mice developed many more and larger metastases.

They also tested the effect of a specific fatty acid, palmitic acid, on metastasis. This plant-derived fatty acid is the main component of palm oil, and in lower proportions, of coconut and other oils, and is used in many kinds of processed food. The researchers treated the oral tumours with palmitic acid for two days and then injected them into mice on a standard diet,.An increase from 50 to 100% was observed in the frequency of the metastatic tumour. That is to say, all the mice developed metastasis in a CD36-dependent manner.

“In mice inoculated with human tumour cells, there appears to be a direct link between fat intake and an increase in metastatic potential through CD36. More studies are needed to unravel this intriguing relationship between diet and metastasis, above all because industrialised countries are registering an alarming increase in the consumption of saturated fats and sugar,” warns Aznar Benitah. “Fat is necessary for the function of the body, but uncontrolled intake can have an effect on health, as already shown for some tumours such as colon cancer, and in metastasis, as we demonstrate here,” explains the researcher.

Is CD36 a therapeutic target for metastasis?

The study demonstrates the anti-metastatic effect of blocking the CD36 protein, both in immunodepressed mice and in mice with intact immune systems. Figures were similar for all tests. The inhibition of CD36 when the animals were inoculated with the tumour cells completely eliminated their metastatic potential. In addition, the administration of CD36-blocking antibodies to mice with already established metastases led to total removal of the metastases in 20% of the animals, while for the others it brought about a dramatic reduction of 80-90% in the number of metastatic foci and their size.

The mice tolerated the treatment in the therapeutic window required to achieve an anti-metastasis effect and no intolerable side-effects were observed in autopsies, and blood and tissue analyses.

IRB Barcelona has applied for IP protection of the results, and the researchers are working with MRC Technology in the UK to co-develop new antibody-based therapeutics against CD36 that are suitable for treatment of patients in a range of cancers. If the development of the novel therapeutic was successful, a new product could be available in 5-10 years.

This work has been supported by the Fundació La Marató de TV3, two project grants from the World Wide Cancer Research of the UK, and Fundación Botín and Banco Santander, through Santander Universidades. Furthermore, the laboratory is supported by funding from the European Research Council, the Ministry of Science and Innovation, and the Generalitat de Catalunya(Government of Catalonia).