The team of Dr. Simó Schwartz Jr gets a polymeric nanomedicine which facilitates concurrent therapies of pharmacological and gene silencing 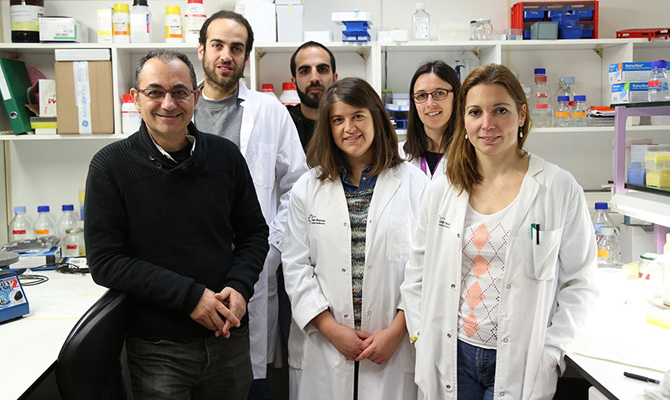 One of the main problems that nanomedicine must face is the improvement of drugs transport and release systems to the correct place of action. And in particular, to take nucleic acids to the right target cells. The team led by Dr. Simó Schwartz Jr, director of the CIBBIM-nanomedicine has managed to create a micelle formed by a combination of polymers and gelatin that allows to effectively carry large amounts of nucleic acids and drugs. The system, also has a large number of carboxylic groups that allow to anchor in a very easy way any type of molecule such as antibodies and peptides. The work, which has allowed the filling of a patent, has been published in Chemical Engineering Journal (D1).

This micelle has managed to overcome two major problems. On the one hand, allows to reduce the toxicity of the whole system. «Most systems of transport of nucleic acids are toxic to the body and with this micelle that combines polymers and gelatin we get this toxicity to virtually disappear,» explains Dr. Schwartz Jr, head of the Group CIBBIM-Nanomedicine. Drug Delivery and Targeting of Vall d’Hebron Research Institute (VHIR).

On the other hand, «we’ve got a nanosystem in which the micelles have a global modular electric charge, that provides neutral charges while traveling in the blood,» he adds. A major problem that most transport systems have is the coating of proteins that they collect once in the blood stream. Most nanoconjugates have a particular global load which can be positive or negative. The positive charges interact with cell membranes and end up being very toxic. On the other hand, if they are negative, it is very difficult that they can encapsulate nucleic acids, which are negative, and also attract many positively charged blood proteins that can change their properties in excess.

«By combining gelatin, which is a positive substance, with a set of polymers and some carboxylics, which are negative, we get a part of the positive micelle that loads the nucleic acid and a set of negative general loads that allow to modulate and neutralize this positivity,» he says. Therefore, its biodistribution is not altered neither high value qualities such as small size, which causes it to be filtered to tumours or the fact of being able to place a directional peptide on the outside which facilitates direct interaction with target cells.

On the other hand, it has been proven that the micelles that we created have some features that facilitate a faster and efficient internalisation by tumour cells, particularly by cancer stem cells, which are the responsible for malignancy and promote tumour metastasis. The amount of drugs and nucleic acids that reach tumour stem cells with this system is much higher.

This micelle has been tested with cetuximab successfully, but at the moment the CIBBIM-Nanomedicine. Drug Delivery and Targeting has different ongoing projects studying the therapeutic efficacy of this transport system with different drugs, nucleic acids and proteins for cirrhosis; HIV; breast, colorectal and pancreas cancers; and also rare diseases such as Fabry’s disease and Pygnodysostosis (an illness caused by the absence of lysosomal K cathepsin).

It should also be noted that most of the elements used to produce the micelles have a very low cost and are easily scalable, which greatly reduces production costs. In addition, «the system is based on polymers and compounds already approved for medical use by the FDA which makes it much easier to translate both to the industry and to the clinic,» concludes Dr. Simó Schwartz Jr.