The Dra. Anna M. Meseguer awarded by the College of Biologists of Catalonia 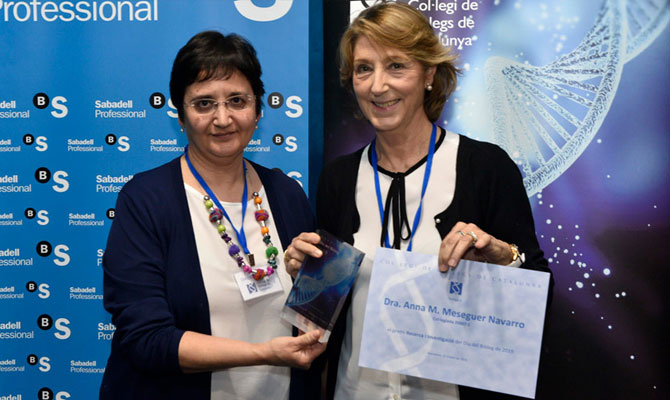 Yesterday evening, on the occasion of the Biologist’s Day, Dr. Anna Meseguer picked up the Research and Investigation Prize awarded by the College of Biologists of Catalonia in recognition of her contribution to scientific advances and the contribution to increasing the professional prestige of the profession.

The Auditori of l’Aquàrium in Barcelona was the venue for the ceremony for the awards that, for the third consecutive year, recognize the professional career of outstanding Catalan biologists.

The Dr. Anna Meseguer is the head of the research group CIBBIM-Nanomedicine. Kidney Physiopathology and has been awarded in the category of Research and Investigation. This award is a recognition of the biologist’s research career in the field of translational biomedical research. «I am very pleased and proud that we recognize the efforts of a very important group of professionals to promote basic and translational research in a complex and rich environment such as the VHIR and the Vall d’Hebron campus and to be today its representative,» said Dr. Meseguer.

Two lectures were given during the ceremony. The first on «Science in support of public policies: the case of the Maritime Strategy of Catalonia», by Dr. Sergi Tudela Casanovas, current CEO of Fisheries and Maritime Affairs of the Generalitat, and a second entitled «Viruses and you: a complicated relationship,» which Dr. Juana María Díez Antón. Coordinator of biology studies at the UPF and Collegiate of Honor in 2018.

The Dra. Meseguer graduated in Biology in 1978 from the Autonomous University of Barcelona (UAB) and obtained her doctorate in 1986 at the Memorial Sloan-Kettering Cancer Center in New York.

During her postdoctorate at the Rockefeller University of New York, she received a National Institute of Health award to work in the field of Molecular Endocrinology focusing on the mechanisms of transcriptional regulation of gene expression in the kidney by steroid hormones, a topic in which she continued to work when she was hired as a «Tenure track» researcher in the same laboratory.

Since October 1990, she has been the head of the research group on Kidney Physiopathology and leading researcher in many national and international competitive projects, contributing with very relevant publications in the field of the action of androgens in renal pathophysiology, as well as in the field of innovation and technology transfer, where the group has achieved 5 international patents.

The Dra. Meseguer, has also been Associate Director for Basic and Translational Research at the VHIR between 2012 and 2018. She is an Associate Professor of Biochemistry and Molecular Biology at the UAB and coordinator of the VHIR Master’s Degree in Translational Biomedical Research. She has directed 17 doctoral theses (7 more in progress) and 39 master theses. She participates in various national and international commissions for the evaluation of projects and human resources.