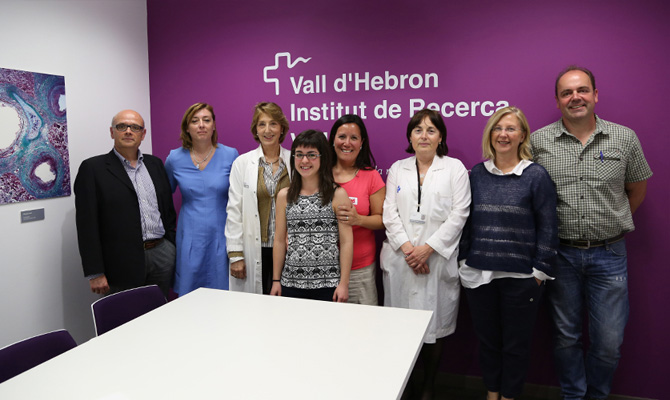 For the second year in a row, the Association for Information and Research of Familial Hipomagnesemia (Hipofam) has given 15000 euros to the research group on Renal Physiopathology of Vall d’hebron Research Institute (VHIR) to investigate this rare genetic disease.

The funds have been collected through numerous charitable activities, such as paddle tennis tournaments, exhibitions and concerts, and also thanks to the city of Castellbisbal, who has made a donation of 5000 euros. The cooperation councillor, the communication councillor of the council and two technicians from Vallès Occidental attended VHIR to make the donation and to check the status of research into this disease, while getting to know the laboratories and installations facilities of the Institute.

Familial hypomagnesemia syndrome with hypercalciuria and nephrocalcinosis is a rare kidney disease of autosomal recessive inheritance characterized by the loss of calcium and magnesium in the urine. Although patients share similar genetic alterations, they evolve differently: some have more renal affectation and others eyes affectation. However, all of them end up progressing towards renal failure requiring transplant, unlike other genetic diseases of the kidney.

At VHIR, the research into this disease is led by Dr.  Anna Meseguer, head of the Renal Physiopathology Group CIBBIM-Nanomedicine, from the area of Vascular Biology and Metabolism, and Dr. Gema Ariceta, head of the Paediatric Nephrology Service at the Vall d’hebron hospital. Both began in 2014 a project to determine the mechanisms involved in the progression of the disease, through the study of exosomes that are expelled in the urine of patients. Last year, thanks to the donation of Hipofam, they were able to hire a biologist, Monica Vall, to run the project and made her doctoral thesis.

In the meeting that the researchers had with the representatives of the Association and the City Council, Mònica has been able to explain to them the progress they have been making in the project over the course of this year. Likewise, the Drs. Ariceta and Meseguer also explained the future steps they foresee, among other things, the creation of a human cell line of the part of the kidney that affects this disease as a model for the study of the mechanisms associated with mutations in the gene of the claudina 19 and claudina 16 observed in patients. A goal, have recognized the researchers, «very ambitious», but that can be very useful not only to better understand this minority disease, but also to other kidney diseases.