Close
HomeBlogKidney PhysiopathologyProven that a protein produced by the kidney... 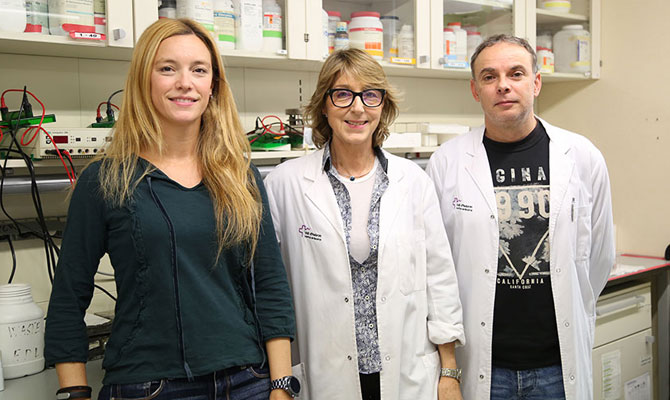 A study led by Dr. Anna Meseguer, chief of the group of research CIBBIM-Nanomedicine Renal Pathophysiology of the Vall d’Hebron Research Institute (VHIR), has showed the role of the KAP protein in the control of the development of the metabolic syndrome produced by following a diet rich in fats. The creation of a model based on a transgenic mouse, where the KAP gene has been overexpressed specifically for the cells in the renal proximal tubule, same location for the expression of the same protein in its endogenous version, has evidenced the role of KAP in the control of the metabolic syndrome and the diabetes type 2. This work has been published in the scientific magazine Scientific Reports, from Nature, and includes the collaboration of Dr. Josep Villena, responsible of the laboratory in Metabolism and Obesity of the Research Unit in Diabetes and Metabolism of VHIR.

Previous studies had already linked the lower levels of KAP protein with the diabetic nephropathy and atherosclerosis, two pathologies that coexist within the metabolic syndrome. The Dr. Meseguer assures that “the transgenic mouse model of KAP allowed to observe that the overexpression of this protein in the kidney protects from insulin resistance, hypertension, liver steatosis and inflammation of the adipose tissue, induced by an obesogenic diet rich in fats”. In a cellular system, the paper’ authors prove as well that KAP acts preventing the production of IL-6 by TNFa, key path for the development of the syndrome. By this means, it proves that the KAP protein is secreted to the extracellular space, bringing along a hormonal effect to the target tissues as the adipose and, most probably, the liver.

The study, together with previous works from the same group, show evidences that KAP protein, kidney specific, has a key role in the induction and activation of several extra renal paths related to cardiovascular and metabolic diseases, that bring along big impacts in our citizen’s Health and the economy behind it, as it triggers obesity and diabetes. Meaning that KAP could become a good therapeutic target to fight the metabolic syndrome.

This and other Works from Dr. Meseguer’s group clearly prove the key role of KAP, and consequently of the kidney and the androgens, in the control of cardiovascular diseases and diabetes type 2. The kidney quits its passive condition in the disease to become an active factor that can control it. This innovative concept not recognized so far should be considered and reframed.

The metabolic syndrome can be defined as a group of metabolic disorders that derive, partly, from unhealthy daily habits, as a sedentary lifestyle and an excessive and unbalanced caloric intake. Nowadays, the metabolic syndrome affects 30% of the adult population in western countries and a 44% of the citizens in USA aged over 50. Hence, its impact is very negative in the citizenship’s health and it means a big sanitary cost.

The metabolic syndrome increases the risk to suffer a cardiovascular disease or a diabetes type 2. At a cellular and molecular level, it is triggered through effects like the chronic inflammation in the adipose tissue, indispensable in the development of metabolic dysfunctions related to the obesity, insulin resistance, renal dysfunction or oxidative stress, among others.