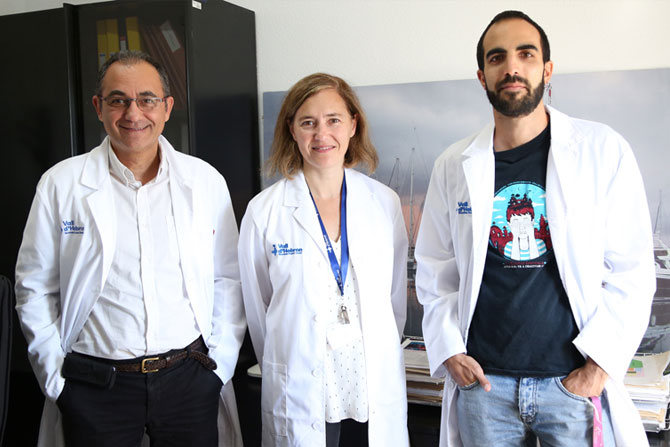 Researchers from the CIBBIM-Nanomedicine Drug Delivery and Trageting of the Vall d’Hebron Research Institute (VHIR) and CIBER-BBN with Dr. Ibane Abasolo at the head, have studied the viability of the bacterial inclusion bodies as a method of distribution of two antitumor proteins, p31 and Omomyc, against breast cancer. The study, published in Advanced Science, has been coordinated by Dr. Esther Vázquez, a researcher from the Autonomous University of Barcelona and the CIBER of Bioengineering, Biomaterials and Nanomedicine (CIBER-BBN), and researchers from the Institute of Advanced Chemistry of Catalonia and the Vall d’Hebron Institute of Oncology (VHIO).

The local release of antitumoral drugs through bacterial proteins in the treatment of breast cancer can mark a before and after in precision medicine. In this sense, researchers have created Escherichia coli cell structures to produce non-toxic bacterial amyloids.

Inclusion bodies or amyloids are nanostructured protein aggregates produced inside a cell, frequently found in specific bacteria and with interesting biomedical applications such as protein drug release, as is the case here.

These protein structures act as antitumoral drug secretion granules and since they are administered locally, they have a sustained therapeutic effect throughout time. Although this research is still in the first stages of development, the cross-cutting principle described in the study opens a broad experimentation field for the generation of new therapeutic biomaterials produced within bacteria for precision medicine aimed at breast cancer and other high incidence neoplasms.

According to Esther Vázquez, “although this technology still has a long way to go before being applied clinically, the results obtained in this study, which has lasted over three years, pave the way for a new therapeutic technology based on bacterial products which have not been clinically explored yet”.

The study is based on a directed release of CD44+ tumour cells in animal models of human breast cancer, of two antitumoral proteins (Omomyc and p31) in the form of nanostructured materials. The main novelty of the study lies in the use of toxic-free bacterial amyloids as a reservoir for these therapeutic proteins. The local administration of this material fosters a sustained release of the drugs and the necrosis of tumour tissue in a relatively short period of time. One of the main advantages of using these types of materials is a sustained protein drug release, which lowers the frequency of administration in relation to the current standards for conventional drugs.

The results in crops showed how “protein aggregates with p31 and Omomyc proteins have toxic effects on tumor cells in culture, especially those with CD44 expression”, says Dr. Abasolo, principal investigator of CIBBIM-Nanomedicine Drug Delivery and Targeting reserach group of the VHIR. “In animal models (mouse) with breast tumors, the inclusion bodies with Omomyc and p31 showed an effect at the cellular level, increasing necrosis and apoptosis, respectively, although apparently the size of the tumors did not diminished”, she adds.

The project also included the collaboration of the lead researchers at the CIBER-BBN group Antonio Villaverde, from the UAB, expert in the development of bacterial materials of biotechnological interest based on amyloid structures, also known as inclusion bodies, and Simó Schwartz Jr, director of the CIBBIM-Nanomedicine (VHIR) and expert in nanomedicine and the molecular biology of cancer.

This research project, funded by the TV3 Marathon Foundation.