Learned lessons from a primary immunodeficiency: a study by Dr. Joan Sayos

HomeBlogImmune Regulation and Immunotherapy GroupLearned lessons from a primary...
3 January, 2018 1194 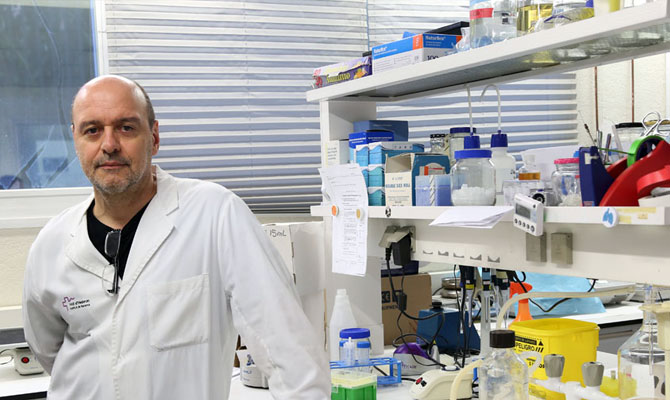 Last September, the journal of Immunology published a new article in the series «The Pillars of Immunology», which reminds the classics that have promoted the knowledge of modern immunology. In this case, the study published has been based in the paper published in 1998 by Dr. Joan Sayos, head of the research group CIBBIM – Nanomedicine, Immune Regulation and Immunotherapy Group of Vall d’Hebron Research Institute (VHIR), commented by the expert in the primary immunodeficiency field, Dr. Pamela L. Schwartzberg. The original study was published as an article in Nature magazine, where Dr. Sayos was the first author and author of correspondence along with Dr. Cox Terhorst.

Placing ourselves during the mid-90s, with an unfinished Human Genome project and many of the sequencing techniques to be improved, Dr. Sayos carried out a post-doctoral stage at Dr. Cox Terhorst’s laboratory, at Harvard University, Boston. The work developed by Dr. Sayos allowed the cloning and identification of the gene that encodes for a small adaptive protein called SAP (SLAM associated protein), which binds to the intracellular tail of the cellular surface receptor SLAM and functions as a signal switch. In the presence of SAP, SLAM would send positive signals, and in the absence of SAP, the signals would be of an inhibitory type. From the gene coding for the SAP protein, they discovered their absence or mutation in patients with the X-linked lymphoproliferative syndrome (XLP1), a rare primary immunodeficiency characterized by fatal mononucleosis induced by infection by Epstein Barr virus.

Later work by the group led by Dr. Terhorst and other laboratories, found out why the immune system of patients with XLP1 could not overcome EBV virus infection and eliminate infected B lymphocytes. It all depended on the function of the receiver of the SLAM family, called 2B4. In the presence of SAP, receptor 2B4 on the surface of CD8 lymphocytes recognizes the surface of infected B lymphocytes and promotes its death. In the absence of SAP, 2B4 becomes an inhibitory receptor that is unable to promote the death of infected cells, which proliferate in an uncontrolled manner, with sudden consequences for the patients.

The impacts today, according to Pamela L. Schwartzberg:

The expert in immunology from the University of Texas Southwestern Medical Center, emphasized that this pioneering work on SAP and members of the SLAM family has led to multiple discoveries about XLP genetic immunodeficiency, as well as the biology of the interactions between lymphocytes, the production of antibodies from the B lymphocytes or the regulation by apoptosis of the function of T lymphocytes.

Dr.Schwartzberg acknowledges the work of Dr. Sayos is an excellent example of how the identification of genes involved in primary immunodeficiency can promote not only knowledge of the disease itself but also reveal new mechanisms that are part of the normal functioning of the immune system.