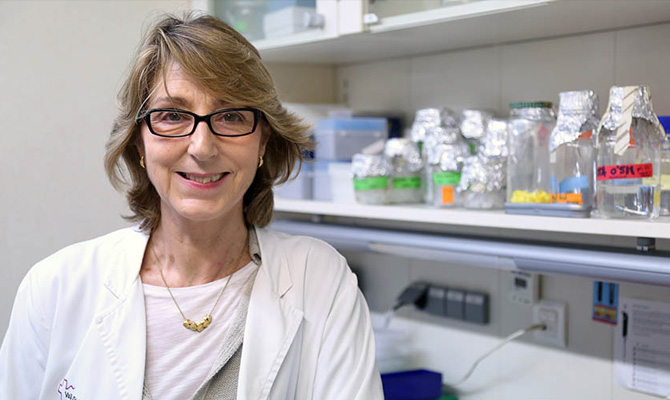 Dr. Anna Meseguer, head of the Kidney Physiopathology group at the Vall d’Hebron Institute of Research (VHIR), has received the 2016 Research Grant for Immunotherapy in Kidney Cancer of the American Association for Cancer Research, endowed with 250,000$ for two years. Her research project, entitled “Could TIM-1 constitute a new target for renal carcinoma immunotherapy?”, aims to study the detailed mechanisms involved in the crosstalk between clear cell renal cell carcinoma (ccRCC) and the host immune system, driven by the TIM-1 protein.

“We aim to further identify new targets for immunotherapy treatment for the most aggressive and common subtype of renal cancer”, reports Dr. Meseguer. This subtype of cancer accounts for approximately 80% of all renal cancers, is asymptomatic and in most of the cases is discovered incidentally by medical imaging. For that reason, she explains that “one third of patients are diagnosed too late”, presenting locally advanced tumor or metastasis.

Her research, in collaboration with Dr. Joan Sayós Head of the Immunitary Regulation and Immunotherapy group at VHIR, will be focused in the role of TIM-1, a protein that regulates multiple immune response phases and maintain immune stability. The TIM gene family has multiple functions in the regulation of immune activation and tolerance, which may have a large impact on the clinical consequences of inflammation, antimicrobial defense and antitumor immune response. In the case of TIM-1, also known as Kidney Injury Molecule-1 (KIM-1) or Hepatitis A Virus Cellular Receptor 1 (HAVCR1), researchers have identified that it is highly upregulated in proximal tubules of injured kidney and in ccRCC tumors. Moreover, they have reported that activation of the IL-6/STAT-3 pathway by TIM-1 determines tumor progression and patient outcome, which also relates with the shedding of TIM-1 ectodomain.

Dr. Meseguer will receive the grant during the AACR Annual Meeting, chaired by the Catalan researcher Josep Baselga, that will take place from the 16th to the 20th of April in New Orleans, United States.