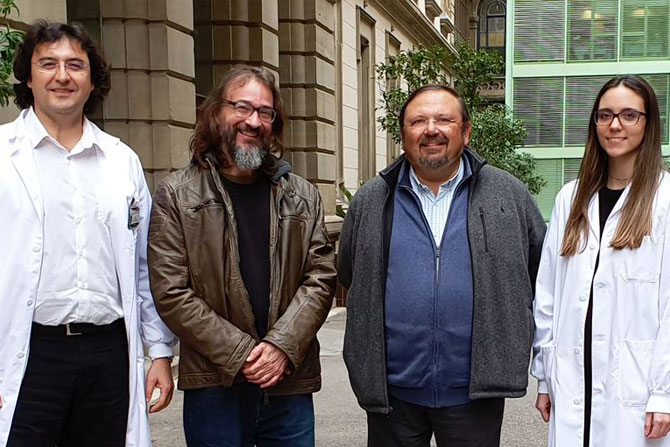 Hepatocellular carcinoma is the most common liver cancer and ranks third in the world in terms of mortality. Its appearance is related to the hepatitis B and C viruses, alcoholism, metabolic diseases of the liver and exposure to certain toxins. Although its molecular mechanisms have been described in detail, no effective treatment is currently available after the early stages of the disease. When ablation is no longer possible, the best therapeutic approaches fail to stop the progression of the cancer. According to the journal Hepatology, this could change thanks to an experimental treatment based on cerium oxide nanoparticles on which the Institut d’Investigacions Biomèdiques August Pi i Sunyer (IDIBAPS) and the Catalan Institute of Nanoscience and Nanotechnology (ICN2) have been jointly working for some time.

The paper explains how, thanks to their antioxidant and anti-inflammatory properties, cerium oxide nanoparticles have been able to partially reverse the cellular mechanisms involved in tumour progression and have managed to significantly increase survival in a rat animal model. The last authors of the study are Prof. Wladimiro Jiménez, head of the Biochemistry Service of the Biomedical Diagnosis Centre at the Hospital Clínic of Barcelona and head of the IDIBAPS Group Translational research group in new therapeutic and diagnostic strategies in liver diseases, and ICREA Prof. Víctor F. Puntes, head of the ICN2 Group Inorganic Nanoparticles and also of the Pharmacokinetic Nanoparticles Group of the Vall d’Hebron Research Institute (VHIR). The first author is Guillermo Fernández-Varo, member of the IDIBAPS research group mentioned above and of the CIBER on Liver and Digestive Diseases (CIBERehd).

This research began almost a decade ago and produced its first results when in 2016 IDIBAPS and ICN2 published a paper in the Journal of Hepatology. The work highlighted the anti-inflammatory therapeutic potential of cerium oxide nanoparticles for the treatment of several chronic liver diseases. The new work in Hepatology focuses on hepatocellular carcinoma and analyses the impact of the experimental treatment on a rat animal model with induced cancer, studies the distribution of the drug in three human livers discarded for transplantation and details intracellular absorption in human liver cancer cell cultures. This translational research brings the new treatment closer to the clinical phases of experimentation.

The research team injected the rats four doses of cerium oxide nanoparticles, two per week, 16 weeks after they developed liver cancer. The spherically shaped nanoparticles, which size was between 4 and 20 nanometers, were mainly concentrated in the liver and spleen a few days after administration. The treated rats attenuated the number of cancer nodules in the liver, had reduced levels of the cancer biomarker alpha-fetoprotein, showed less proliferation of the cancer cells and more apoptosis cell death and had beneficial effects by reducing the damage produced by inflammation and altered lipid metabolism. When the survival of the treated rats was compared, it was observed that both the nanoparticles and the best therapeutic option available at the time of the study doubled the survival of the rats from about 15 days to over 30.

The distribution of nanoparticles in functional human livers was observed though imaging techniques in organs rejected for transplantation. In only 30 minutes half of the nanoparticles were retained in the liver forming agglomerates of different sizes in several locations. Cell cultures from human liver cancer also showed a high adsorption capacity of the nanoparticles after 24 hours of exposure. Therefore, treatment based on cerium oxide nanoparticles, which equalled without side effects the results of the best therapeutic option available today, could lead to an innovative pharmacological strategy for a disease in need of new therapies.